Oh What a Beautiful Morning’

Oh What a Beautiful Day

On June 3rd, my mom and I had our 5th theatre date. We ended up seeing Oklahoma at Central Piedmont Community College. As a college graduate, there is something special about seeing a musical at that school. Six years ago, I graduated from high school. In 2012, I started college at CPCC and saw my first show, Godspell, in September there. Then I saw Les Mis November 2013 and both shows were amazing. So I was well aware that CPCC can make their musicals feel professional. So as a college graduate, it felt like things came full circle by going back to CPCC to see a musical.

Here is my history of Oklahoma. I saw the movie, 2014, during a big snow storm, when class was cancelled for about 4 days, and the movie was leant to us. This was when I was still a student at CPCC. As years went by, I forgot about my opinion of it. Did I love it or did I not? I am glad I finally got to experience it in the theatre, and I knew that CPCC would do a fantastic job at it because they have a strong theatre program.

When the overture started, I could tell they had a wonderful orchestra. The moment I heard Ashton Guthrie as Curly start singing “Oh What a Beautiful Mornin'”, I knew there was a talented cast. His Curly showed he had a crush on Laurie throughout act I even though Laurey couldn’t tell if she was in love with him. He was a very strong lead.

Steven Martin as Jud Fry was wonderful. His Jud Fry frightened me a couple of times and that showed he did the role well. He really brought out the abusive side of Jud perfectly especially in act II. But sometimes the costumes were confusing when it comes to Jud. Sometimes I couldn’t tell who he was. I got so used to his first costume that I couldn’t recognize him in his other costumes. That was my only problem.

The entire ensemble along with the other principals werewonderful and brought out and was perfect. Songs like “Oklahoma” and “The Farmer and the Cowmen” were delivered wonderfully by the ensemble. This entire cast made me laugh a couple of times. 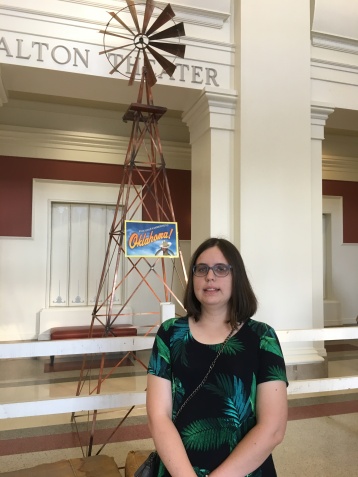 I love the various dances throughout the show. It worked how the actors changed the set pieces as the show continued. The transitions happened through background music. The costumes matched the time period and showed. The wonderful thing about Oklahoma in musical theatre history is that Oklahoma really was the first musical of what we know musicals to be. Oklahoma is a wonderful musical with wonderful songs like “Oh What a Beautiful Mornin’, “Surrey With the Fringe on Top”, “Many a New Day”, “People Say Will Say We’re in Love”, “Farmer and Cowman” and of course the anthem, “Oklahoma”.