I have talked about this topic more times than I should on my blog: love triangle. There is one in particular I love more than the others. It has evolved a lot over the years. My favorite love triangle of musical theatre is found in Wicked. It is found between Elphaba-Fiyero-Glinda. Why is that.

1) It is the first one I emotionally bonded with. This sounds like a crazy reason. It is so true. I first discovered the concept of love triangles in Wicked. I don’t remember if I first was aware of the love triangle during the 1st time I saw Wicked or the 2nd time I saw Wicked. I do know it was connected to one of the two. I don’t know if “I’m Not That Girl” started as emotionless or if it began as just a sad song- did I realize it was a sad song my 1st time or the 2nd- once again know it was connected to those two times.

What makes Wicked’s love triangle more complex? It begins like this: Fiyero and Glinda are a couple while Elphaba is dealing with the pain and heartbreak of unrequited love- you think that setup is endgame- you think that Elphaba will have unrequited love for the entire musical. Fast forward to the top of act II- Fiyero realizes something- he is in love with Elphaba- he decides to break up with Glinda leaving her dealing with the pain and heartbreak of unrequited love. So now, Elphaba and Fiyero are a couple and Glinda is dealing with the pain of unrequited love. So you have two girls getting hurt in one love triangle- it is not straight forward due to that. How do the two girls respond to the unrequited love? They decide not to steal Fiyero away- that to me shows their loyalty towards each other- they want to keep friendship alive. Why does this plot twist happen? Based upon the last time I saw Fiyero, I believe Fiyero had a crush on Elphaba without knowing, and did not realize it until act II- my actor, Ashley Parker Angel, went ahead and in act I decided to have stronger chemistry with Elphaba and weaker chemistry with Glinda in act I foreshadowing the plot twist. Wicked’s love triangle is much more complex than the Phantom of the Opera and Les Mis group- all because of Fiyero’s role- he was the one who was responsible for the plot twist. Before my 4th time- I always left the theatre with “why”- I never grasped why the plot twist happened. 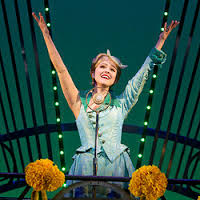 3) Elphaba- The fact that Elphaba is part of this love triangle is a HUGE reason why Wicked is home to my favorite love triangle. Elphaba is my all-time favorite musical theatre character. I see a lot of myself in her, and there are parts of her I don’t see myself in. So there is a bonus. That might be taking things almost a bit far, but that is true.

4) Elphaba X Fiyero x Glinda- This is connected to #3. I made it known that in Wicked I am emotionally connected to only three characters. They happen to be Elphaba, Glinda, and Fiyero: I only am fully focused on the friendship and the love triangle each time I see Wicked. Characters play a huge part in my love of a romantic sub-plot. The entire storyline is on Elphaba and Glinda- their friendship. All three characters are complex- yes, you might think only Elphaba and Glinda are complex. But there is more to Fiyero than you think.  The complexity of this love triangle is not just because the unrequited love shifts- it is also because all three characters are complex. In high school, I remember knowing that the love triangle was fascinating and adding an incredible texture to Wicked, but I did not understand why.

The 4th time I saw Wicked- the love triangle went through some drastic changes- after my 3rd time- before my 4th time- I came to a realization- “I’m Not That Girl” is a heartbreaking song- figured that out due to “On My Own” and memorizing the lyrics. Due to paying even closer attention to Fiyero, I was able to have a clearer idea why the plot twist happened. Due to knowing “I’m Not That Girl” was heartbreaking coming in, I had to look at that song fresh as if I never heard that song before- I knew I wanted to think more about what I was feeling- I had to pay even closer attention to the Lion Cub Scene- 1) to look for clues pointing to the plot twist and 2) to understand how heartbreaking “I’m Not That Girl” is.

2 thoughts on “What Makes Wicked’s Love Triangle my Favorite”